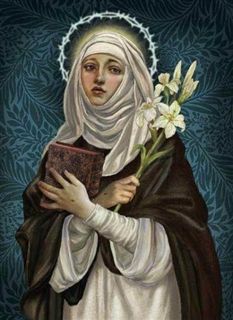 Catherine de Ricci is known for her highly mystical and miraculous life. Born in 1522 she established early on a great love of prayer. At the age of 4, she entered her first convent in Florence where her aunt was already a nun. After returning home for a few years, she left for Tuscany to join a different convent of Dominican nuns at 13.

Even at an early age, Catherine was a leader, chosen as the mistress of novices at the convent. Not too long after that, she became the perpetual prioress at only the age 25, which she served until she died.

Catherine de Ricci is known for her famous “Ecstasy of the Passion” for which she went through every week from Thursday at noon until Friday at 4:00 pm. In this, she would go through all the stages of the Lord’s Passion. She would go through this for several years. Catherine de Ricci also appeared in visions, most notably to St. Philip Neri, who said he would have conversations in person with her even though he was in Rome and she was in Florence. Catherine also had to bear the stigmata, which are the wounds of Christ in her hands, feet, side and around her head.