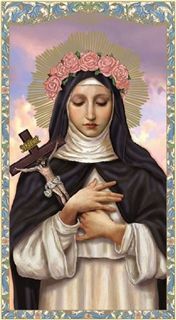 St. Rose of Lima
(Peru)
Feast Day: Aug. 23
Died in 1617
Canonized in 1671
Isabel de Flores was such a beautiful child she was called “Rose.” Rose wanted to give her life completely to God, but her parents wished her to marry and wouldn’t give permission for her to join the convent and become a nun. Rose moved into a hut in the garden and earned money by selling flowers during the day and doing needlework at night. She used the money to help her family and buy food for the needy people in her community. Her brother helped her add rooms to her hut where she cared for homeless children and the elderly.
When she was complimented for her appearance, Rose cut her hair and rubbed pepper on her face so she wouldn’t be noticed for her looks. She took vows for the Third Order of St. Dominic and remained chaste her whole life, although she didn’t become a nun.
She is the first person from the New World – the Americas – to be named a saint.
Patron Saint of Latin America and the Philippines, gardeners and florists
HOUSE DEAN
Rachele Piazza