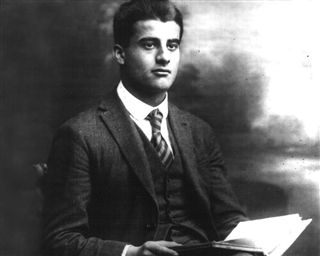 Blessed Pier Giorgio Frassati
(Italy)
Feast Day: July 4
Died in 1925
Beatified in 1990
In 1901, Pier was born in Turin, Italy. He exhibited great concern for the poor starting in his childhood. Pier joined the St. Vincent de Paul Society and spent hours helping the sick and poor. As a mining engineer, Pier cared greatly about miner rights. He advocated for just working conditions and fair wages.
Pier was very faithful. He went to Mass every day to receive the Eucharist and he also prayed the Rosary. Pier shared his faith with others.
Pier lived life to the fullest. He was handsome and athletic and loved hiking, mountain climbing, riding horses, and skiing.
When he was just 24 years old, Pier became sick with polio. On his deathbed, he whispered the names of people who needed assistance to his family and friends who’d gathered to be with him.
Pier was declared “Blessed” by Pope John Paul II who called him a “man of the Beatitudes.”
Patron of young adult Catholics and one of the patrons for World Youth Day
VERSO I'ALTO!
Frassati House Motto
FRASSATI LEADERSHIP

Faithful to Catholic Tradition and to our Dominican heritage of scholarship and service, Bishop Lynch High School promotes the development of the total person by bringing together a diverse community in a rigorous, college preparatory environment where students are taught to strive for excellence, seek truth, and work for justice in the world. - Founded in 1963