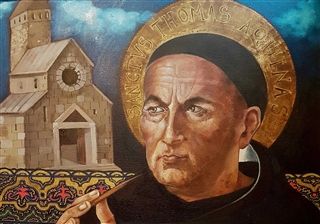 Aquinas House
(Italy)
St. Thomas Aquinas
Feast Day: Jan. 28
Died in 1274
Canonized in 1323
When Thomas Aquinas was a young boy in Italy, he was placed in the Abbey of Monte Cassino as an oblate (offered as a prospective monk). After nine years in the monastery’s sanctuary of spiritual and cultural life, he was sent home when the emperor expelled all the monks because they were too obedient to the pope. Thomas was then sent to the University of Naples where he was introduced to the scientific and philosophical works that were being translated from Greek and Arabic. Thomas secretly joined an order of Dominican monks and began a life of preaching and teaching.
An exemplary scholar and prolific writer, Thomas wrote about 60 known works. His writings covered a broad spectrum of topics, including commentaries on the Bible and those examining Aristotle’s views on natural philosophy.
Patron Saint of Catholic universities, colleges and schools
HOUSE DEAN
Joe Inman
MENTORS
Petra Mehen
Mark Melancon
Greg Millerick
Olivia Orrantia
Ana Osborne
Carlos Rodriguez
Beth Storm
Megan Weaver